Thursday 9th: Waves 3-6 feet off-shore winds during the day with winds turning on-shore later in the afternoon. Surfable waves on most beaches.

Monday 13th: The waves have picked up to 4-6 feet bigger on open beaches, variable winds making protected corners the better places to surf.

Saturday 18th, Sunday 19th: The surf report at the moment is boring conditions are the same, with on-shore winds, swell 3-5 feet, rain at times. Nothing's changed.

Wednesday 22nd: Waves are 2-4 feet with ocasional bigger sets. Winds continue to be slight to moderate on-shore easing in the afternoon.

Saturday 25th: Waves 2-4 feet and glassy, good surf on all beaches, winds and thunderstorms in the afternoon, making a late surf messy. 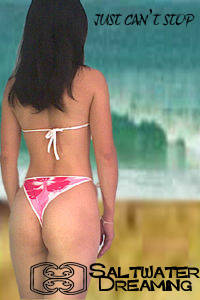 Friday 1st: Little or no wind with waves 2-3 feet, glassy conditions. The Phuket surf report is back. Over the past week the waves have been of a good size from 2-6 feet.

Tuesday 12th: Today waves were small and glassy in the morning and picking up to 3-5 feet in the afternoon. Winds were variable with light off-shore winds in the morning.

Wednesday 13th: Very small waves at around 1-3 feet on most beaches, the light smooth conditions made up for the small swell.

Saturday 16th: Waves in the morning were 1- 3 feet with glassy conditions. The winds increased in the afternoon making conditions bumpy.

Monday 18th: The swell was extremely small today only big enough for people under 2 feet high.

Monday 25th Tuesday 26th: 3-6 feet strong on-shore winds easing a little in the afternoon. The tides are very high due to the recent full moon.

Tuesday 2nd: The morning had waves 4-6 feet winds easing throughout the day, in the afternoon things had settled down to 2-4+ feet with smoother conditions.

Monday 8th: not interesting, the same as yesterday!

Wednesday 10th Thursday 11th Friday 12th: The strong on-shore winds have been blowing for 3 weeks without stopping. The swell has remained a consistent 3-5 feet. Surfers in Phuket have now found their favourite protected corners and are waiting out the monsoon winds.

Saturday 13th: The winds have dropped today and the swell is a very solid 4-6 + feet. Most beaches have surfable waves.

Monday 15th: No wind very smooth and glassy 2-4 feet waves on all beaches.

Tuesday 16th: 2-3 feet waves on most beaches with little or no wind making conditions very smooth and glassy.

Wednesday 17th: Waves are a small 1-3 feet with smooth conditions small surfable waves on most beaches.

Kamala Surfing Contest - Saturday 20th: Small surfable waves, winds increasing in the afternoon. Kamala surfing contest got off to a great start with some nice surfing in all divisions.

Sunday 21st: Extremely small waves. The Kamala surf contest did not start until 2.30pm, but everyone had lots of fun while they were waiting. The open division has been postponed waiting for better waves.

Tuesday 23rd: Same as yesterday, only good for first time learn to surfers.

Tuesday 30th: The waves today were small and just rideable on open beaches. Wave and swell reports show that the swell may increase for the next few days.

Friday 2nd: Perfect conditions with light off-shore winds waves up to 4 feet and excellent, a classic surfing in Phuket day!

Sunday 4th: Small swell with moderate to strong on-shore winds there are waves to be surfed, but not very smooth or even.

Monday 5th: Nice 2-4 feet waves today, in the morning variable winds tending off-shore at times. The winds picked up through the day and late afternoon dropped with all beaches having clean surfable waves.

Monday 12th: Winds from the north early in the morning blowing out the very small waves.

Sunday 18th: Strong winds and heavy rain with a swell of 6 feet +

Tuesday 20th: Big, off-shore and perfect today. 6-8 feet faces with a light back spray. The only problem today was where to go surfing!

Wednesday 28th: Very light variable winds and a 2-4 feet swell making a nice day for surfing with surfable waves on all beaches.

Friday 7th, Saturday 8th, Sunday 9th: Beginner waves in the morning on the low tide, in the afternoon lake Andaman!

Sunday 31st we saw some of the last waves of the season the best waves were at Surin Beach off the southern headland from midday to late afternoon, smooth and nice shape.

Saturday 19th: the waves are now not big enough for surfing it looks like this could be the end of the season. Friday 18th: small smooth rideable waves at Kata Yai offshoe winds in the morning turning onshore in the afternoon.

Over the last week 12th to 17th there have been reports of rideable smooth but small waves on some beaches, including Nai Harn, Kata Yai, Karon and Relax Bay.

12th - 14ththere were small waves in Phuket around 2 feet, some more open beaches with shallow sand banks were a little bigger, light offshore winds. The first waves of the season saw many people scrambling for their boards to get back in the water. Songkran usually marks the beginning of the surf season and this year everything is on time!

16th - 19th The small swell that was here is gone, back to smooth seas, great for sailing.

" 28th The wave size has dropped a little with 3-5 feet waves on most beaches. Winds continue from SSE

25th The waves are finally here! In the morning on the high tide the swell wasn't good, but as the tide dropped the waves increased to 3-5 feet light variable winds. Late afternoon a tropical storm blew the surf out, but should be good waves again tomorrow on an increasing swell.

1st - 4th There were very very small waves under 1 foot, with onshore winds. There are no surfable waves at the moment.

5th - 10th after a big storm overnight there are small waves 1-2 feet on open beaches, slight winds. Best on mid to low tide.

11th - 12th reports of small clean waves on some beaches have been reported 2-3 feet. good time to explore more out of the way open beaches.

13th - 15th very small waves .5 - 1 foot thunderstorms and rain at times, reports show a new swell could be on the way from the north.

19th Waves 2-4 feet bigger on open beaches slight to moderate onshore winds making the surface a little bumpy, but good waves on many beaches. Swell expected to increase for Saturday and Sunday.

24th The surf was 2-4 feet, bigger on some beaches. The winds dropped at times throughout the day leaving smooth and sometimes glassy conditions.

1st-2nd very small waves really not big enough to surf. Looks like a small swell is headed towards Phuket around Sunday.

13th-14th Waves continue to be small around 1-2 feet, most of the swell in the Bay of Bengal is reaching further north from Khao Lak up to Burma.

19th the swell is on the rise. waves of 3-5 feet on most beaches in Phuket strong WNW winds and rain squalls making conditions messy, tomorrow looks like the swell may increase.

25th 2-3 hour window in the middle of the day gave glassy 3-5 feet waves with light off-shore winds. The rest of the day rain storms. 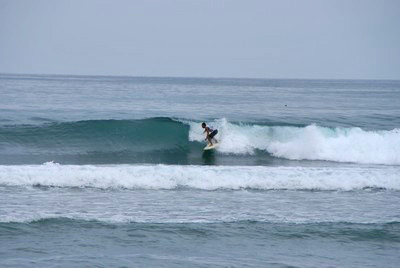 1st Small rideable and smooth waves on most beaches 2nd small and windy, good day to stay at home.

3rd The waves have increased in size with the strong onshore winds, waves 3-5 feet, bumpy, but rideable.

4th Today winds are easing, slight to moderate onshore , light to no winds late in the afternoon. Waves 3-6 feet.

5th Waves decreasing, 1-3 feet in the afternoon with light to moderate westerly winds.

10 - 11th Thw swell is rising with the strong onshore winds. 2-5 feet messy with only a few protected breaks surfable.

12th - 13th For the last 2 days there has been strong onshore winds and rainstorms, the waves are 3-5 feet most beaches are unsurfable.

17th Moderate SWS winds in the morning easing throughout the day, in the afternoon the winds dropped revealing nice 4-6 feet waves.

18th Strong winds in the morning easing to moderate in the afternoon, surfable, but messy 4-6 feet waves.

19th Morning no wind with an uneven swell, but surfable waves on most beaches, in the afternoon light onshore making conditions bumpy, 3-4 feet.

26th - 29th 2-4 feet no wind in the morning with smooth conditions, light onshore in the afternoon

30th conditions haven't changed except for the rain 🙁 Surfable waves in protected corners.

1st small 2-3 feet waves in the morning and late afternoon. The middle of the day had rain and variable winds.

3rd started very small in the morning picking up to 2-4 feet in the afternoon.

11th - 14th The surfing conditions haven't changed much over the past few days with strong on shore wind and waves from 4-6 feet.

15th the wind and rain have increased, so has the swell with 6-8 feet waves on open beaches

16th Winds easing to slight onshore 6 feet plus waves with clean faces. Strong storms hit the coast at times throughout the day

17th waves 4-5 feet with slight to no winds. Nice rideable waves on all beaches.

29th - 31st waves from 2-4 feet bigger on some beaches. Rain and wind storms throughout the day, but late in the afternoon especially on the 31st the wind dropped and there were very clean rideable waves.

3 - 4th Waves very very small, with slight conditions. Waves not really big enough for surfing but beautiful blue skies make it perfect for hanging out at the beach.

9th Waves 3-6 feet clean in the morning with picking up through the day, good surfable waves on most beaches

28th Slight winds and a swell of 3-5 feet bigger on some beaches, nice surfing waves today

29th Winds slight to moderate and variable with waves 2-4 feet. Strong wind and rain in the afternoon. 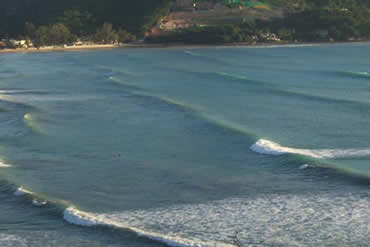 10th - 13th Waves small but surfable, rain and wind storms around the island.

17th - 19th Lake Andaman is back!! no waves, winds and evening rain storms coming from the east signal the end of the surf season for this year.

20th - 30th no waves, great for diving and snorkeling.

19th - 25th November: very very small waves on many beaches with totally perfect conditions, some beaches in Phuket and north have rideable waves, ask the locals where to go, when you are here!!

3rd December: reports of small rideable waves on some beaches.

5th December: there are no surfable waves in phuket

16th December: On the right tide there are small surfable waves on some beaches