All About Surfing in Thailand and Thailand's Surf Spots

If you have heard of surfing in Thailand it was probably about Phuket, but Phuket isn't the only place to go surfing in Thailand. There are other locations scattered along the east and west coasts. Below is info and overviews of some of the better known surfing spots in Thailand 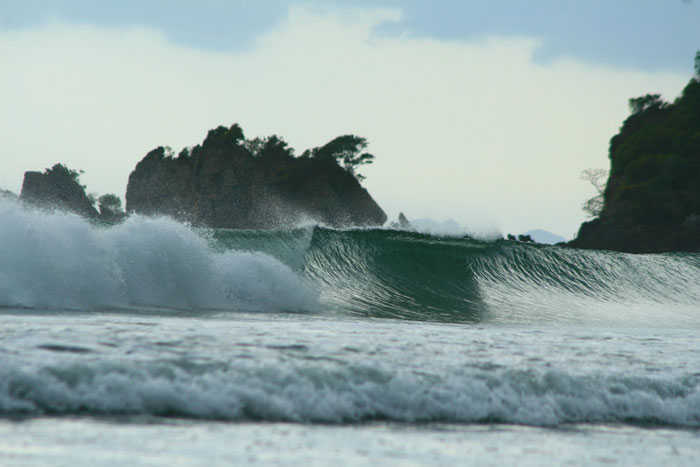 The History of Surfing in Thailand

Surfing is quite a recent phenomenon in Thailand in relation to the rest of the world. In about 1998 there weren't many Thai surfers and most people surfing in Phuket were foreign expatriates living and working in Thailand. Travelers passing through brought a few surfboards and left them for the locals. The waves and surf spots were, and many still are, closely guarded secret surf spots.

Thai people generally became interested in the sport in the mid to late 90's and in more recent years the amount of Thai surfers has grown exponentially with many groms now in the surf everyday.

Quiksilver was the first to organise a contest in 1999 at Kata beach, which definitely put Kata Beach on the map as a beach in Thailand that has decent waves. Other surfing organisations such as the Kamala Surfing Club, have been running an annual contest for the past 14 years.

Where to Surf in Thailand

East side: Although Phuket is noted as having some of the best and most consistent surf in Thailand, other places such as Rayong, Hua Hin and Koh Samui on the East side of Thailand get their share of waves too from the northern monsoons in China and Japan, but they are less consistent. Rayong and Hua Hin now have local surf clubs.

The southern coast around Nakorn Sri Thamarat and further south is an area that is worth exploring, in Phuket's high season, from November to March.

The west side of Thailand gets swell from the southern monsoons, the same monsoons that bring waves to Indonesia and Sri Lanka. A bit of exploring the mainland areas and outer islands can find some great surf locations from Phuket to the border of Burma. Places such as Khao Lak now have many local surfers, and beaches scattered along the mainland coastline are now frequented by surfers looking for that perfect wave.

Most of the surf spots in this area are isolated, and it is always a good idea to take a friend when exploring, or no one will believe the epic waves you got 🙂

Some of the best beaches to surf on the west coast of Thailand are (the ones we can talk about):

When to Surf in Thailand

In general, the west side of Thailand including Phuket, gets surf from April/May to September/October. The east side of Thailand gets surf from November to March. The surf on the east side is generally smaller and less consistent, but it doesn't mean there aren't good waves there, it just means you'll be waiting and checking the conditions a lot more.

The surf in Thailand definitely does not rank as a world-class surf travel destination like Bali, Hawaii or Sumatra, but it definitely has its place. The waves are generally smaller and less powerful making it ideal for people learning to surf and for longboarding.

In Thailand, there has been a resurgence of longboarding in recent years, as the waves are generally a little smaller and fatter. Now at some surfing locations you'll see more longboards than shortboards in the water – especially on those smaller, less powerful days. Longboarding in Thailand is definitely a surfing style that is growing in popularity and with pro longboarders passing through the local surfers are now exposed to longboarding at a new level, making it very much part of the surf scene. Check this article about a group of pro surfers in Phuket.

Bodyboarding or boogie boarding hasn't taken off as well as surfing, but with some beaches such as Surin beach and Laem Singh in Phuket are ideal for body boarding with barrels and heavy shore-breaks. These beaches have the biggest shore breaks during the peak of the monsoon season. Be warned they are powerful enough to break boards and bones!

You can check our Phuket and Thailand surf report page showing when the waves are good in Thailand.

Surf gear, accessories and surfboards have always been difficult to come by and much of the equipment has been left here by surfers heading home from other destinations like Indonesia.

This is also changing with surf shops in Phuket, Koh Samui and Bangkok. Although the latter 2 are brand name merchandising stores, local surf shops do exist, but it wont be long before the big brand names enter the Thailand surfing market driving higher prices for surf gear. Saltwater Dreaming is the only local no hype surf shop in Thailand, run by surfers. They are happy to help you with choosing and setting up your boards and gear.

Bodyboarding gear is also becoming more readily available, and quality bodyboards and accessories are imported. The most popular brand of bodyboard in Thailand, by far, is NMD Bodyboards.

Surfing Photos and More Information on Surfing in Thailand

For years now photos and pictures of surfing in Phuket and Thailand are easily found on the internet, which do show that the surf in Thailand can get really good. You'll probably also find a lot of paraphrased versions of this page our website and our photos there too!

If you need more information on surfing Thailand try using the menu at the top of this page to explore surfing beaches in Phuket and Thailand.

From Antony Colas when he was here in Thailand

Phuket waves are usually fueled by the strong SW monsoon fetch in the Andaman Sea. From May to September, there is some decent surf to be tapped on the western coasts, the conditions obviously getting better as you head north towards the border with Myanmar.

Around the main beaches of Kata, Kalim and Kamala, Phuket island hosts a small surfing community with a few surfshops, like Saltwater Dreaming which produces their own wax (Gecko Glue) and provides and surfboard rental and a large range of new surfboards for sale.

Maybe, the fact that Cobra near Pattaya is the largest surfboard manufacturer in the world with brands like Surftech helps Thai locals to find the good boards. Don't forget also that Sheiko factory near Bangkok is the largest neoprene wetsuit producer in the world ! But who needs a wetsuit in Thailand anyway ?

You can read his full story here Antony Colas in Thailand