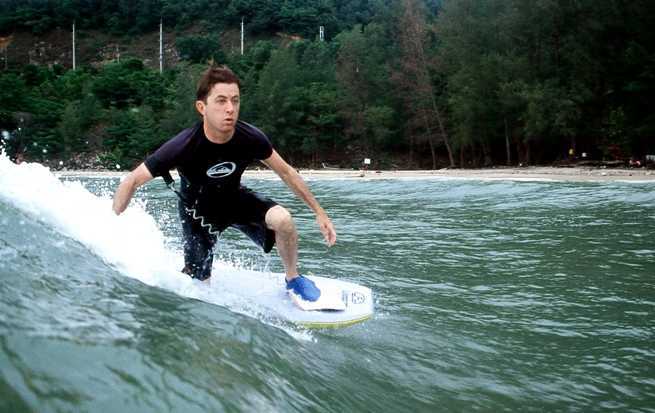 The maneuvers are divided into 4 different types :

All descriptions are made for a ride on a left hand wave, if your favorite break is a right hander, just reverse all the body, hand and arm positions

A Bottom Turn
is to make a turn once you reach the bottom of a wave after taking off without losing any speed.

Too often, this basic maneuver is forgotten or not well executed , but a good bottom turn is the key for all others maneuvers, in other words you can't try to do 360's if you can't do properly a bottom turn.

A bottom turn is done by putting your weight on the left side of your bodyboard, digging the rail with your left elbow, lifting the other rail with your right hand, lifting off the water your inside leg and look towards your destination.

Once you feel that the turn has started and that you are now well positioned in the curl of the wave, leaving behind you the white foam, center your body back in the middle of the bodyboard, release the pressure on both your hip and your elbow, and slide forward your body slightly to get speed.

Now you are ready to execute the first basic trick!

A cut back
is a turn back to the curl of the wave either to regulate your speed (if you were too fast and close to get out of the wave) or to get re-positioned waiting for a section with a throwing lip.

For advanced riders, this Re entry turn at the end of a Cut Back can be even coupled with a 360 reverse !!!

Once you pull all the tricks prone riding, you can try Drop Knee riding as a bodyboard can be ridden in both stance and the panel of figures is just as wide.

Drop Knee Riding
is kneeling on a bodyboard with one knee at the back and one foot up at the front, for natural bodyboarders the left foot is at the front.

Drop Knee DK Riding is a different approach to bodyboarding compared to prone riding; it is very close to surfing in terms of maneuvers and technique but in the same time the panel of tricks is wider and it is actually much harder, just think about standing up on shortboard without fins.

The story about Drop Knee Riding said that Jack "the Ripper" Lindholm was the first bodyboarder to ride like this and it was during a demonstration in between two heats of the Pipe Master ; it was a solid 12 feet + on that day.

How to Drop Knee Ride?

In the beginning, you have to choose a flat wave with an easy take off; once you feel that you can take off and be in drop Knee quickly enough to go for a bottom turn , you can start to take off in hollow wave.

Note: described for a regular bodyboarder riding a right-hander, just reverse all the body hand and arm positions for a left-hander and if you are not regular.

Note: your right foot should be in the water with your fin acting as a rudder.

This maneuver can be done on the flat section of a wave, in the white foam, off the lip or even in the air (air 360) You can do a 360 while prone riding (see picture) or drop knee riding. The technique is the exactly the same wherever you intend to try a 360.

You have taken off on a nice wave, made a good bottom turn and you are right in the curl of the wave; here are the steps to do a 360:

This is exactly the same as a 360, but instead of starting your spin on the left, you start your spin on the right; it's a bit more complex than the 360 but it can be a really nice trick if well executed

Note: a Reverse 360 on a left hander is actually a normal 360 on a right hander and vice versa; try to surf on both your left and right to master these tricks.

If you feel comfortable now with degree turn on a bodyboard 360, Reverse 360 and cut back; you can start thinking about some simple combos:

Air also called an aerial
is a maneuver in which the entire bodyboard extends above the lip.

This is a really important maneuver in modern bodyboarding; you have to master this trick before trying the intermediate combinations and expert maneuvers described below. As its name suggests, an air is a turn where the entire bodyboard extends above the lip of a wave.

The El Rollo
is a cornerstone trick in bodyboarding, it consists of an air but just after being pushed by the lip, the bodyboarder has to roll over before landing.

Like a 360, there are some variations for the El Rollo: through the lip in a close out section or inside the barrel (Barrel Roll)

El Rollo means in Spanish "barrel", you have to follow the natural cylindrical move of the lip with your bodyboard; it is easier than it looks if you choose the right wave!

Ruin Your Back Combos With Two Different Maneuvers

Check this page from time to time for further updates